Pictures are a bit scarce this week. I was too hungry when I made the roast broccoli to snap a picture before we dug in, but believe me when I say it was delicious! 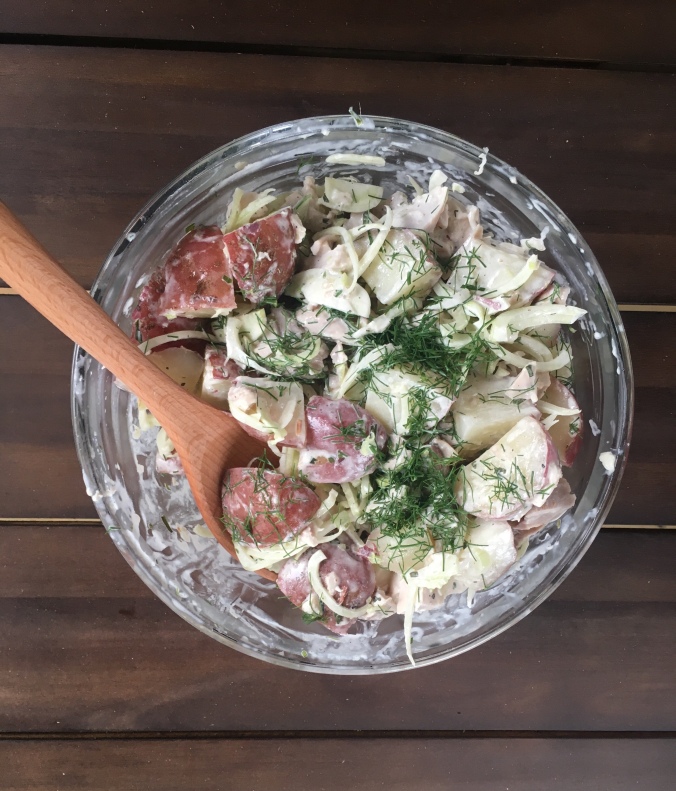 This chicken, fennel, and potato salad is like if your everyday picnic staple got all dressed up for a movie premiere. Substantial enough to be a full meal on its own, if you cook the chicken and potatoes ahead (or buy a rotisserie bird), it all comes together on a weeknight without any/much cooking, perfect for our first heatwave of the season here. 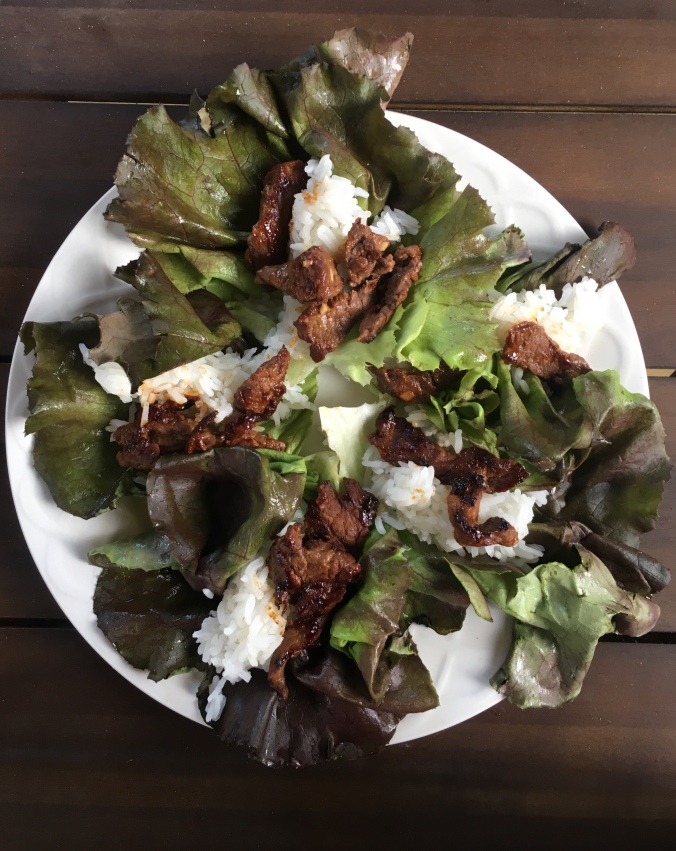 Also heatwave friendly are these bulgogi lettuce wraps. The meat is sliced thinly and cooks very quickly, so it can be grilled outside or on a grill pan inside. I usually top this with pickled radishes or other veggies, but I was trying to get this from plate to face as quickly as possible! For a lunch-friendly meal, I chop the lettuce and top with rice and meat for an easy salad. 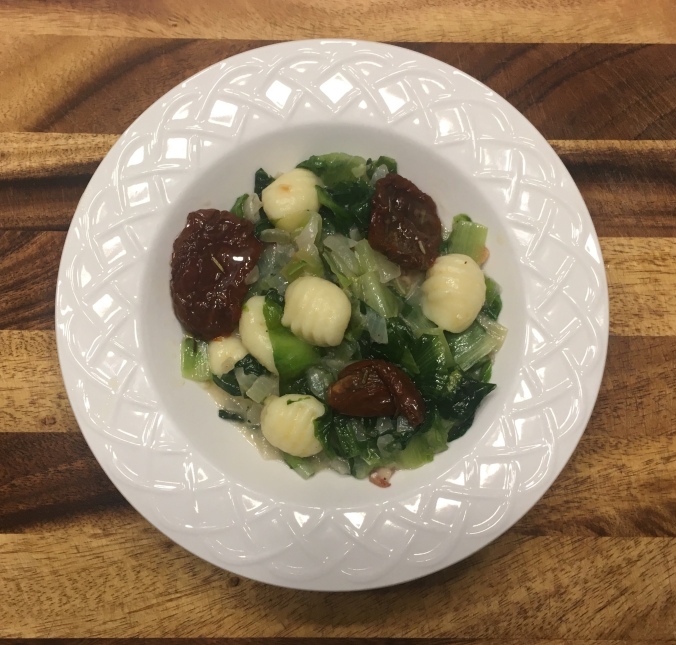 And in the comfort food category, we have this gnocchi with bacon and escarole. I swapped sun-dried tomatoes for the fresh ones and used a large head of escarole, so it looks more like a salad than a pasta dish, but it was still delicious. With a slightly smaller bag of frozen gluten free gnocchi than what the recipe called for, this only made 3 servings instead of 4.

The cauliflower will be roasted for tonight’s Taco Friday meal, and I’ll use the squash tomorrow as noodles as planned, just in time for the next basket of veggies to fill the empty space I had started to see in the crisper!

The solstice this past week plus the first yellow squash of the season is a sure sign summer is definitely here!

This is what I have planned for this week: 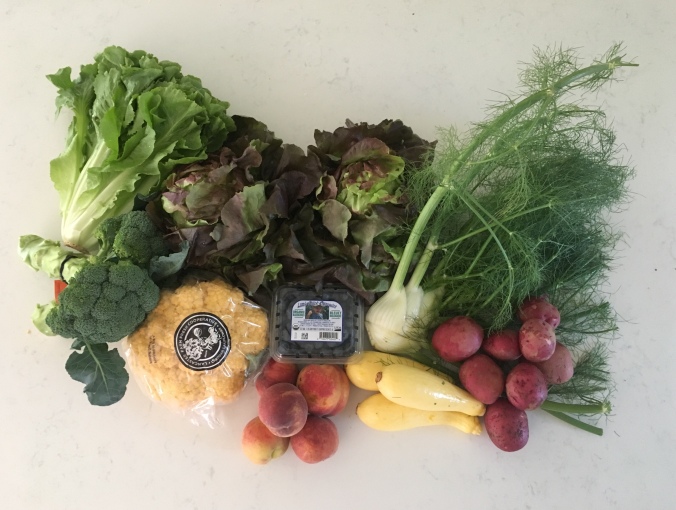 I made pretty much everything we had planned this week. We still have a head and a half (!) of lettuce left to use, as well as some cilantro. See a selection of what I was able to use up in the photos below. 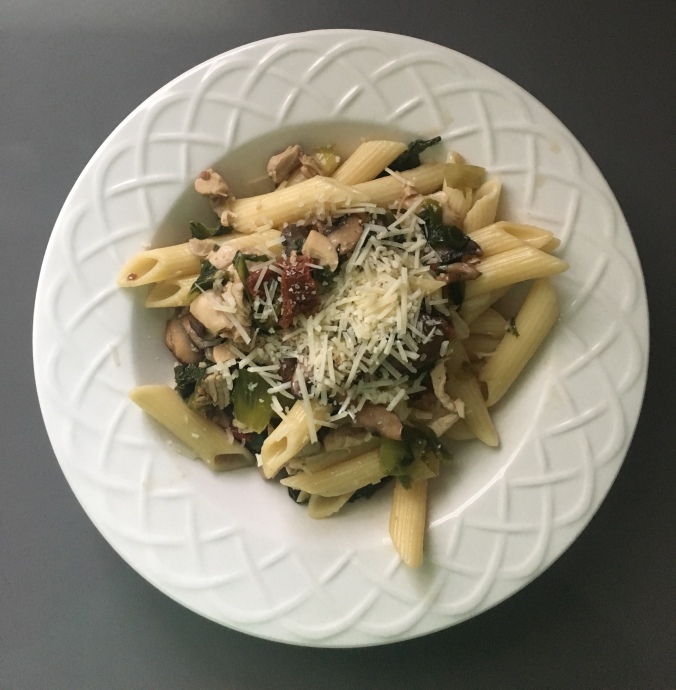 Here’s the pasta with mushrooms, escarole, chicken and sun-dried tomatoes. I followed the planned recipe pretty closely, except that I used penne instead of shells and cremini mushrooms instead of shiitake. I also let the escarole cook with the lid off to further reduce the broth since reviewers complained it turned out a little soupy. Tasty, easy, and a great way to use escarole! 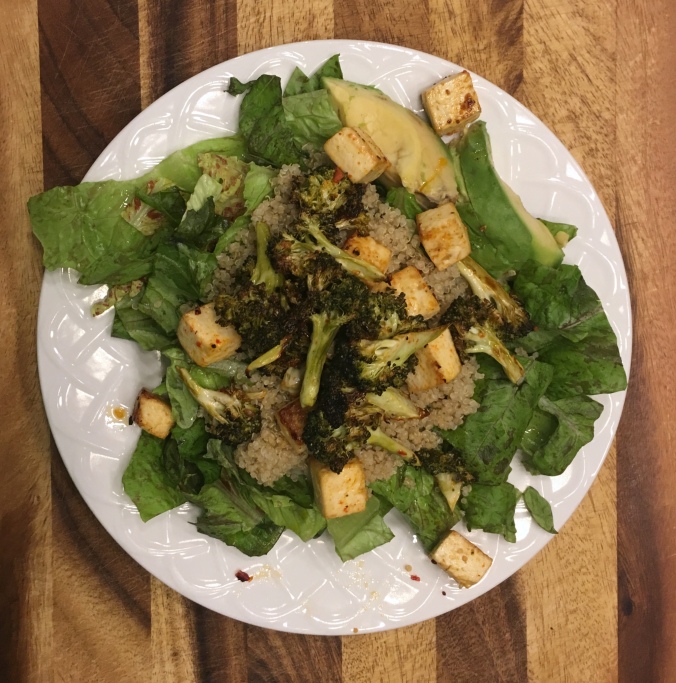 Knowing how much lettuce we had to eat this week, I turned this harissa-roasted broccoli and tofu quinoa bowl into a salad! I was rushing to finish dinner and forgot the red onion and mint. (This also explains the less than stellar plating and lighting conditions.) I think the red onion would be good sliced and roasted with the tofu and broccoli. I’ve also made this before with quick pickled red onions and that’s delicious as well! 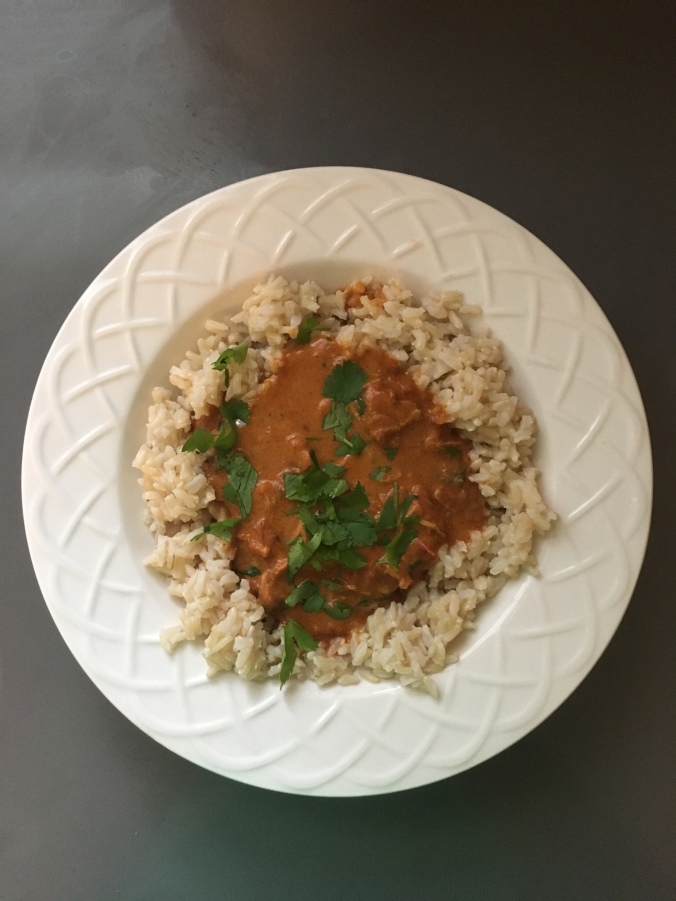 This was my first time making this Instant Pot butter chicken recipe. I swapped chicken thighs for the boneless skinless breasts since that’s what I had thawed. I used tomato sauce combined with my four chopped up tomatoes because I couldn’t find tomato purée. Once the pressure cooking finished, the sauce was thinner than I wanted, so I put it on Sauté for several minutes to reduce before I completed the last step and added the butter and cream. I also only added two tablespoons of butter at the end instead of four because I couldn’t bring myself to put nearly a half cup of butter plus almost a cup of heavy cream in this dinner! The result was creamy and delicious all the same.

Tonight we’re trying the clam pizza with kale and white sauce. Maybe with a side salad? 🙈We have too much lettuce!

Whatever you’re having today, have a happy Friday!

A long weekend provides such a chance to catch up on my home to-do list, including meal prep for the week ahead. With summer temperatures setting in, it’s going to be more difficult than usual to spend a whole day over the stove. Alternating roasting veggies with a pan of brownies in the oven might be just the motivation I need!

Here’s what I’m thinking for how to use up my basket this week:

Instant Pot Butter Chicken (will chop up and toss in my tomatoes along with the tomato purée, didn’t get quite enough to cook it down for a substitute)

I’ll probably also use the kale and last week’s green garlic in a quiche. I definitely need to make some salads to work on using up all the romaine we got this week. I have some extra berries in the fridge and I love a Black and Blue salad – I add sliced steak to make it a more substantial meal. 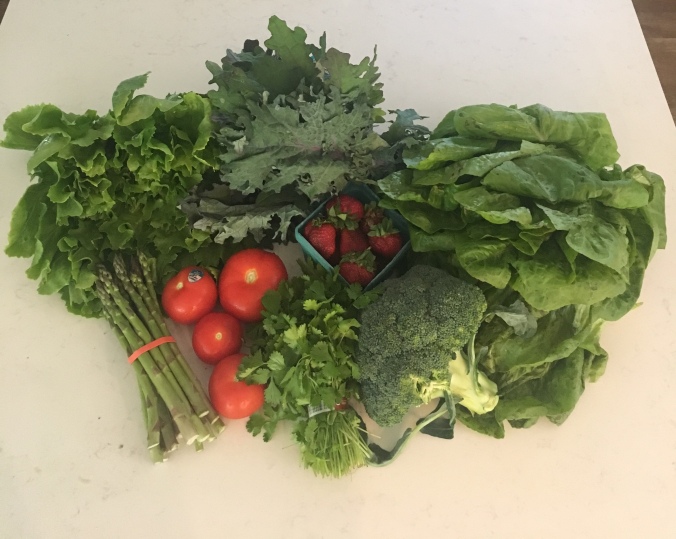 (Still trying to work out the best angles in the new house, please bear with my photography for a few weeks!)

Online recipes can be hit or miss (have you seen Pinterest fails?), but when one comes by way of the Bon Appétit Test Kitchen, you start to feel bit better about your chances of success. I thought the original recipe was too salty, so I’ve tried to cut down on some of the salt for this version in the full recipe after the jump.

To start, wash and cut into strips around 10 cups of escarole.  Don’t worry, it cooks down! 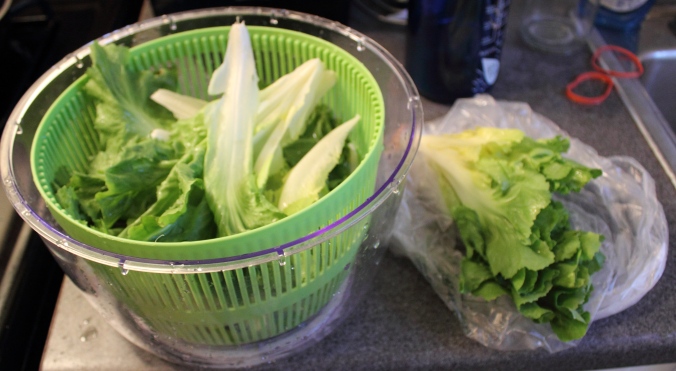 Mash anchovies with oil and butter until it forms a paste. Add garlic and capers and cook for a minute.

Cut the radishes into bite-sized chunks. 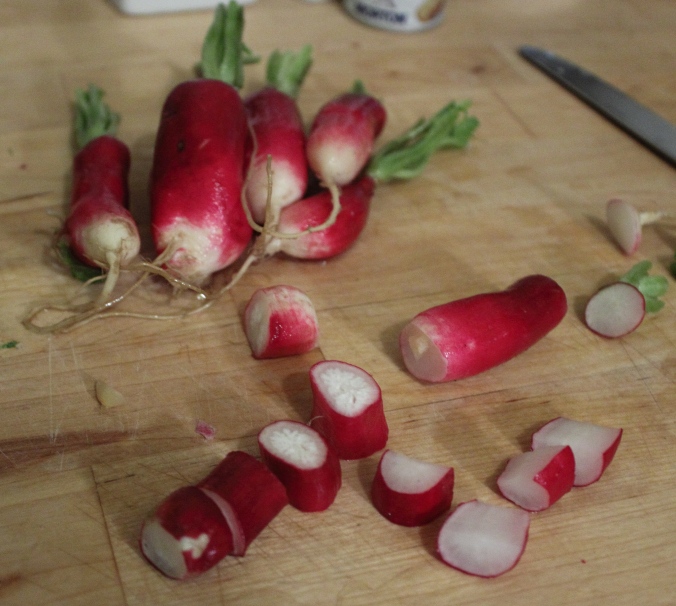 Add to pan over medium high heat and cook for around 3 minutes. 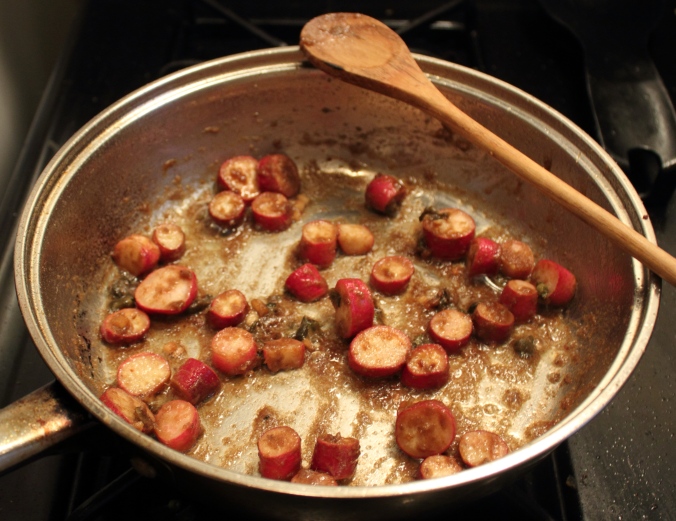 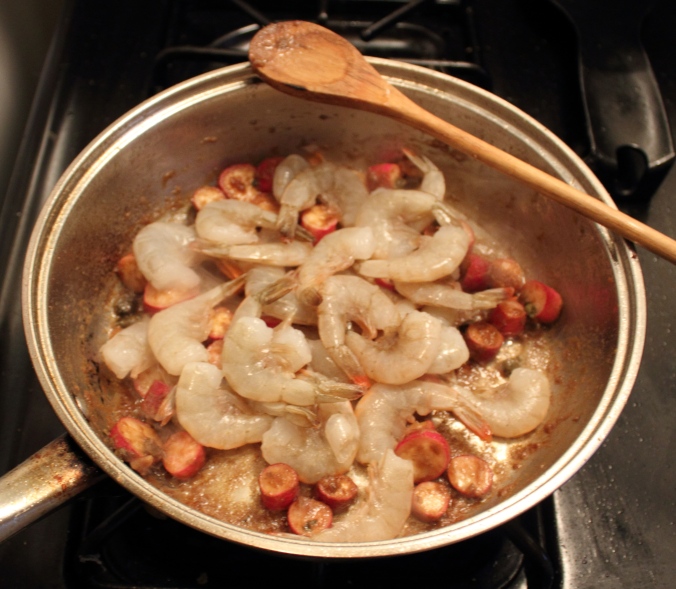 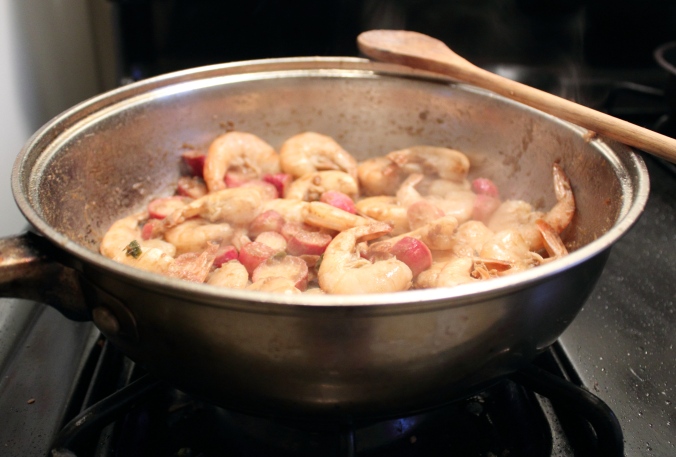 Add about half the escarole.  Cook it until it has wilted down, about a minute. 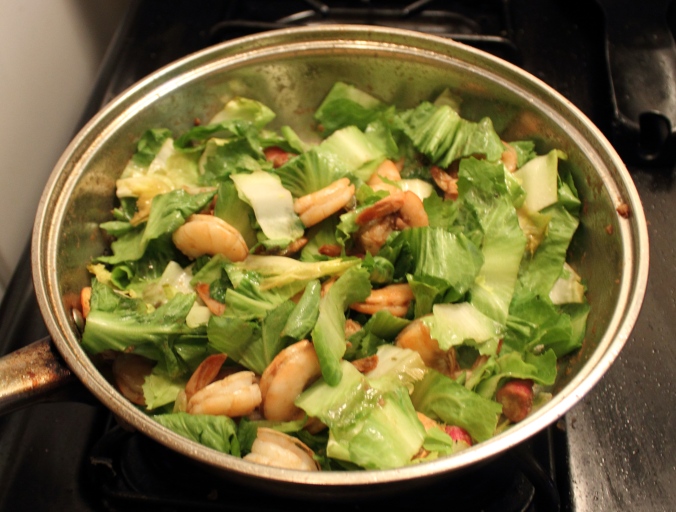 Add the rest of the escarole. Cook for another minute. 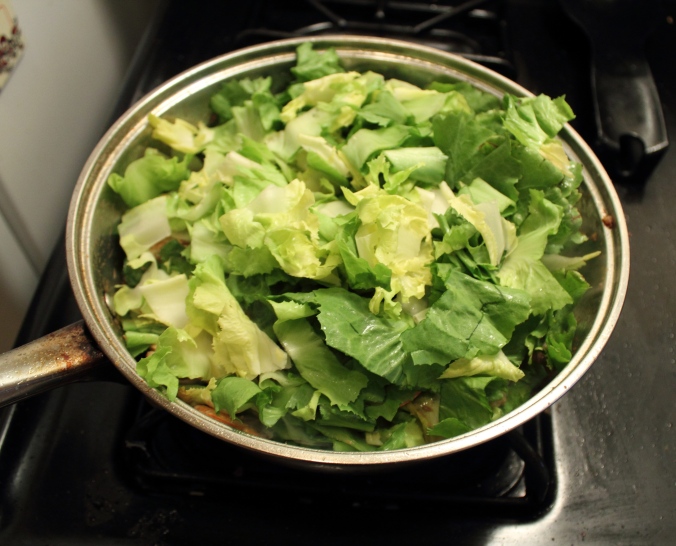 I told you it would cook down! Remove from the heat, and toss with parmesan, lemon juice, and pepper, and enjoy. 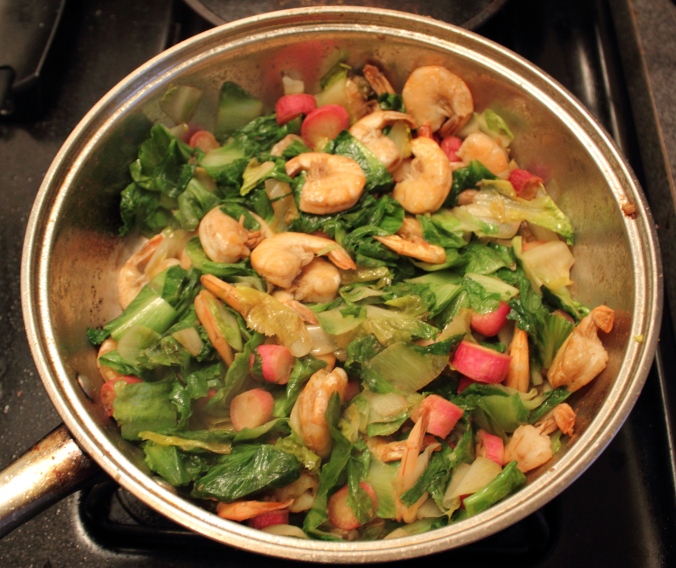 END_OF_DOCUMENT_TOKEN_TO_BE_REPLACED

Oh Food & Wine, can you do wrong in a recipe?  This recipe for fettuccine with escarole in a brie sauce was one of my favorites thus far.  Not too heavy, but with a decadent touch of creamy brie that makes a simple but sophisticated sauce.  Check out the photos and recipe below.

Behold! A pound of escarole.  This was about half of my very large head of beautiful leafy goodness. 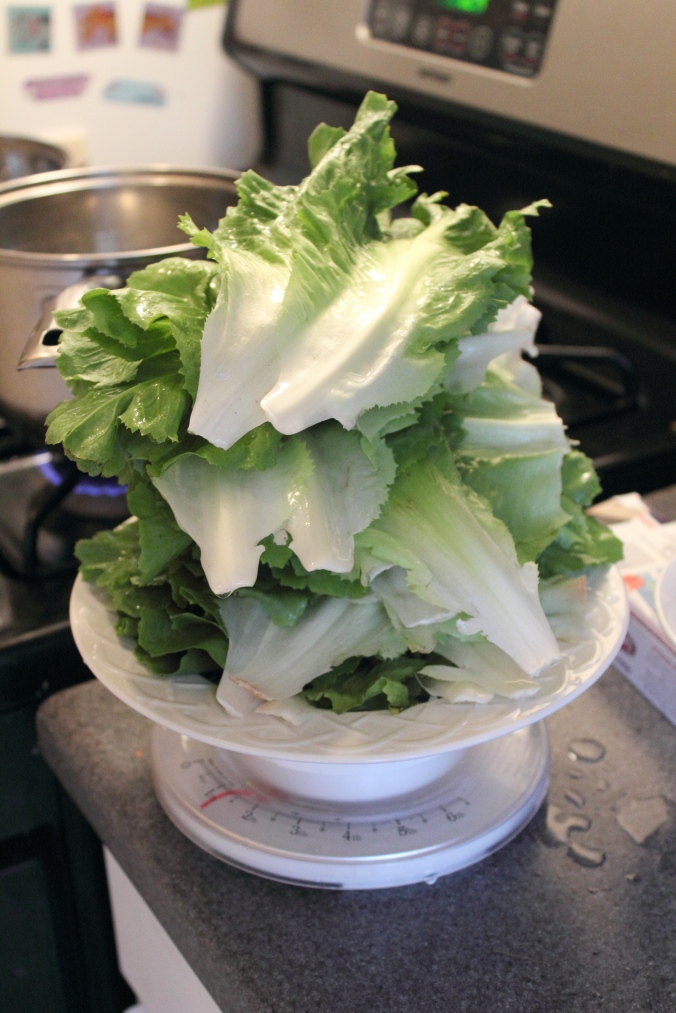 The original recipe calls for 2 ounces of bacon or pancetta, but in hindsight, I would have added about 4 ounces of chopped cooked ham, cut into a much coarser dice.  The meat taste was faint to nonexistent! 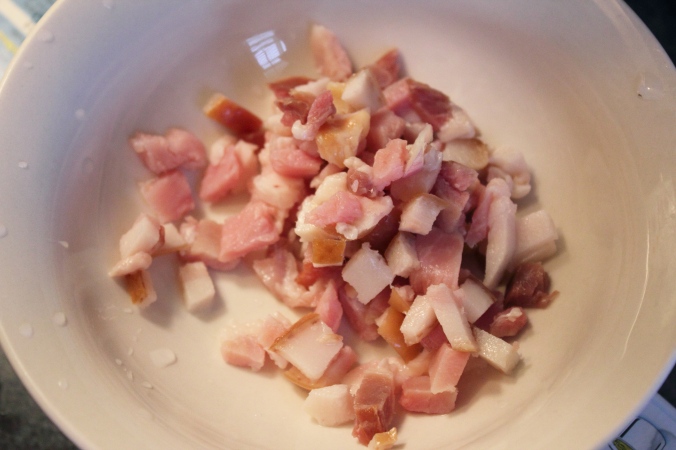 I rolled up the escarole and cut it into roughly 1 inch ribbons.  You can see at the top right that I trimmed the leaf base a bit to get rid of some of the tougher stalk material. 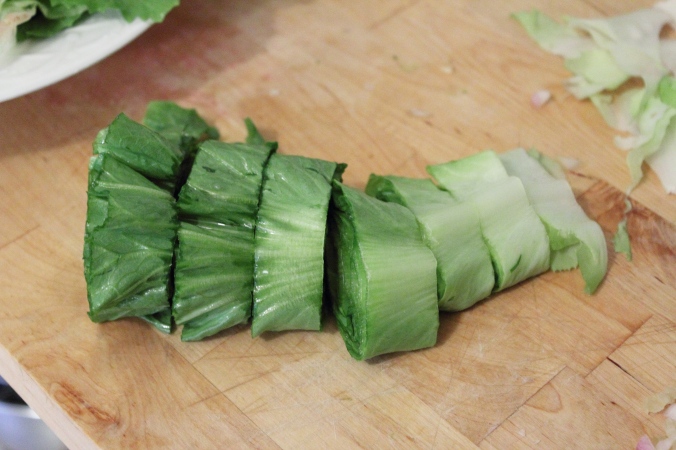 Cooking up the shallot with the bacon. 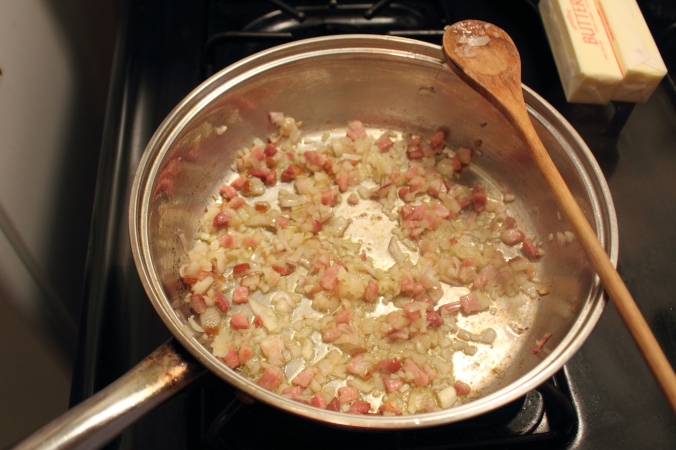 The escarole goes in light green and fluffy. 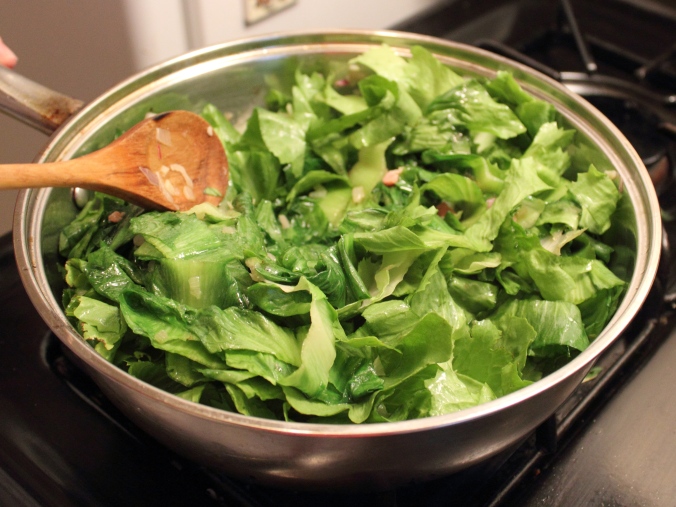 And cooks down to a glossy dark green after about 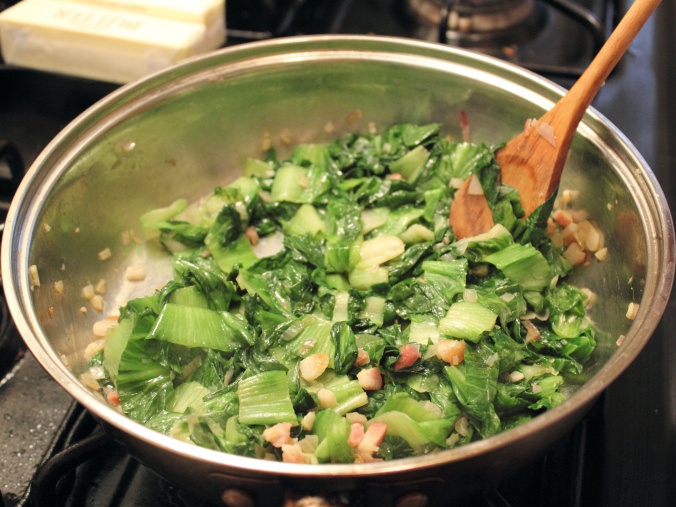 Add the cooked fettuccine, some pasta water, and the brie.  The sauce will thicken as it sit. 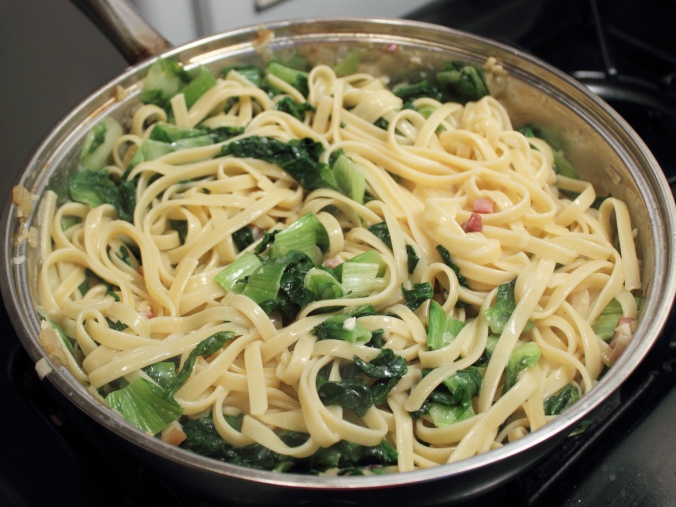 Fettuccine with Escarole and Brie via Grace Parsi/Food & Wine 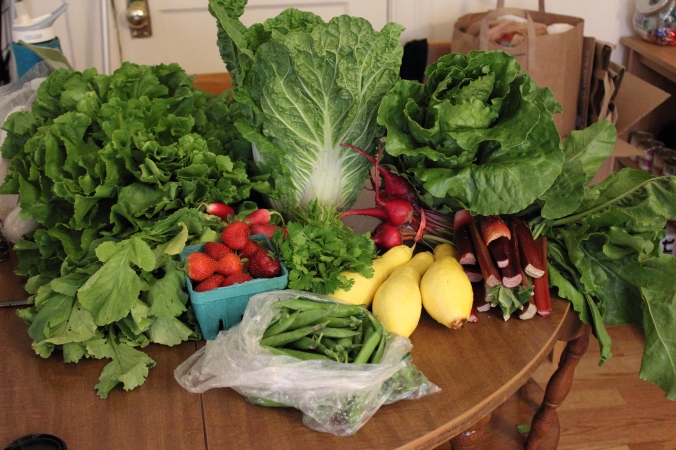